We stock a wide range of parts as well as complete new and rebuilt transmissions. Contact us if you have questions, would like to purchase a transmission or parts, or to schedule transmission service. 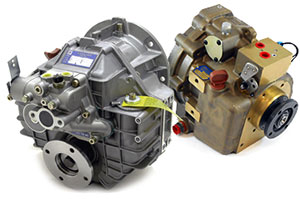 What transmission oil should I use?
For Velvet Drive and Borg Warner 71C and 72C transmissions, and ZF Marine 25, 45, 63, 80, and 85 series transmissions (hydraulic shift), use Dexron IIE ATF, Dexron III ATF, or any ATF fluid which meets Detroit Diesel Allison C-4 specifications.
» Permalink to this answer
How often should I change transmission oil?
This depends on how often your boat is used and how much idling is done versus cruising. Generally once every 6 months (twice a year) is safe. If you use your boat heavily, or the engine idles a lot, you may want to change oil more often. When an engine idles or is run at low rpms, it creates more vibration for the transmission, as the firing impulses are farther apart. This causes more wear and tear than when cruising.
» Permalink to this answer
What transmission do I have?
All transmissions will have an identification tag somewhere on the top or side from the factory. If this is still present, the model number, ratio, and other information will be listed on it. The problem is these tags can become rusted and hard to read, or may be missing entirely. If there is no tag present, the best way to find out what transmission you have is to take digital pictures, upload them to an image hosting service such as Imgur or PhotoBucket, and email us links to the images.
» Permalink to this answer
Why is my transmission noisy?
Transmission noise is most commonly caused by a poorly running engine or a worn out drive/damper plate. A compression check is a must before putting any blame on the transmission. If compression is not within 10% in all cylinders, uneven firing impulses may cause the transmission to make backlash noise.

Noise may be more apparent at idle, since the engine firing impulses are further apart. Avoid idling for great lengths of time as this puts extra wear on the transmission. Transmissions last the longest at steady cruising speeds and with no high-rpm shifting.
» Permalink to this answer
Do I need to replace my oil cooler or drive plate?
Oil coolers can become corroded and blocked, and drive plate springs/dampers can become worn and less effective. Both of these can put your transmission at risk. We always recommend replacing both cooler and drive plate when installing a new or rebuilt transmission.
» Permalink to this answer
Why won't my transmission go into gear?
Not going into gear is usually caused by a lack of oil pressure for hydraulic transmissions. First thing to do is check the transmission's oil level and insure it is topped off. The next most common cause is incorrect shift linkage. Have someone inspect the shift lever on the transmission while someone else shifts the transmission (this can be done with the engine off). Make sure the shift cable is pushing/pulling the transmission's shift lever all the way into gear.
» Permalink to this answer
My transmission oil is dark, light pink, or milky. Is this bad?
New oil is mostly transparent. If your oil is old and you can no longer see though it (on the dipstick) or is very dark brown, it's time for an oil change. If your oil is light pink/white, milky, and thick, then you may have a water problem. When red ATF transmission oil is mixed with water and churns through the gears of a transmission, it gains a milk-shake consistency and turns light pink or white. This is very bad for the transmission and the oil should be flushed immediately. Usually it takes several flushes to get rid of the majority of the milky oil, and we strongly recommend bringing the transmission in for a rebuild, as there may be damage that could lead to bigger problems later. Leaks usually come from a failing transmission oil cooler, so it may be a good idea to replace that at the same time.
» Permalink to this answer
What causes gear clatter?
Gear clatter occurs when the tooth flanks in the transmission separate and hit each other again in actual operation. This is caused by irregularities of torque and of rotation. The possibility of tooth flanks to separate is due to the backlash required for compensating tolerances and thermal expansion to ensure the operational safety of the transmission.

As a rule, gear clatter is the result of an unfavorable interaction of individual components, such as engine, couplings, gears, propeller shaft, and propeller. Such influences are beyond the control and responsibility of transmission manufacturers.

Gear clatter at idle may occur when there are low numbers of revolutions per minute. The phenomenon is due to irregularities during the ignition and combustion process which occur at low engine speeds. This type of gear clatter increases with the specific output of the engine, the reduction of moveable engine masses and a diminished idle speed. As a rule, idle gear clatter will not damage the gears, as almost no torque is transmitted at low speeds or when idling. It produces, however, a disagreeable noise.